By tcahstouffville May 24, 2019 Uncategorized
No Comments

Your dog could be bringing a hidden danger into your home – Let me explain.

As a veterinarian my focus had always been on preventing Lyme disease in dogs. I had always thought that when a tick crawls onto a dog it posed little risk to the owner, just the dog.  How wrong I was.  Here is the real-life scenario that I witnessed that I think all people should be aware of as it opened my eyes to a hidden danger.

A mother and her adult daughter went for a one-hour walk in the Rouge Valley with their dog Scruffy. They then got into their car and drove home. While having coffee in their kitchen the daughter noticed a bug crawling on a chair, then another on the wall. They were ticks! m“Where did the ticks come from? What are they doing in our house, don’t they live in the woods?” they wondered. Then it came to them, “The dog!”They checked Scruffy and found another two ticks embedded in the skin behind his ears.

This is when we got involved. I removed the ticks. They were Deer Ticks, the kind that carry Lyme disease. Worse, the ravine that they had been walking in was known to have ticks carrying Lyme disease. This was a real danger.  This both puzzled and concerned me. I had always assumed that a tick, once it grabbed hold of a dog’s fur and climbed aboard, would waste no time in latching on; but two ticks had spent part of the walk and the car ride home wandering over the dog and had fallen off in their home. Why had they not attached to the dog?

Researching this I found the answer.  Ticks are programmed to try and attach around the head, neck, and ears where the skin is thinner and the dog has more trouble grooming so that there is less chance of them being removed. They cement themselves in place once they attach so, unlike a flea who bites and moves, a tick is committed to the spot it selects. It wants to make sure that it is a good one.  This means that after a weekend walk in the woods or long grass, a dog could pick up ticks and drop them in the owner’s car or home.

These ticks or nymphs (immature stages the size or a grain of sand to a poppy seed) would then be free to attach themselves to the unsuspecting people or children in the home or be waiting in the car for the husband or wife to set out Monday morning for work.

They could then crawl up the unsuspecting driver’s neck and attach in their hairline where they would be difficult to detect especially if they were the tiny nymphs. Undetected they could pass Lyme disease onto the owner without treatment being initiated.

This frightened me. This is a huge extra risk for owners that many are not aware of. My focus had always been on protecting the dog and we can do this with vaccines and topical or oral tick medications, but this illustrated that your dog can actually bring ticks into your car and house that are still looking for a host.

Avril Lavigne contracted Lyme disease and has no idea when or how she was bitten. Could a tick have hitched a ride to her home on her dog?

So what can we do?

One solution is to apply a tick treatment to the dog that repels ticks and kills ticks on contact so that they do not climb aboard the dog to be transported into the car, or if they do climb on the dog they come in contact with a pesticide and even if they drop off in the house they will die and not pose a danger to the home owners. The topical we recommend will kill a tick in under three hours if it spends just 10 minutes on the dog. Another is to carry a lint roller in the glove compartment and run it over the dog before getting into the car. This will pick up the tiny nymphs and adults. 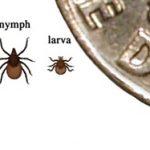 Lyme disease is spreading, ticks don’t care who or what they bite so it is important that we do all we can to prevent our families from being bitten.  Lyme disease is real, it is not just something we read about. Here is a list of some famous people who have contracted Lyme Disease: Avril Lavigne, Yolanda Foster, former President George Bush, Amy Tan, Aleck Baldwin, Jamie Lynn Sigler, and Rebecca Wells.  Make sure you know the danger and how to protect yourself and your pets.

Things to know about ticks:

Health officials recommend that Canadians be aware of the risks of Lyme disease and take precautions.

Here is a list of 9 precautions that you can take:

I first wrote this in 2016. Since then I have had 4 more owners tell me that they have seen ticks fall off their dogs in their homes.  In September 2018 a new client told me about an incident that confirmed my worst fear.
His dog was on an ‘internal’ tick preventative. When his dog came in from outside he had hopped up on the couch for a nap with the owner. When he awoke, he discovered that he had a deer tick imbedded in his neck. The owner had not been outside. This tick had come inside on his dog!
Fortunately it was in an area where he noticed it and was treated by his doctor. If it had been in his hairline he might not have noticed it and potentially contracted lyme disease without ever knowing that he had been at risk.
This is important to understand: “Without a product that repels or kills ticks on contact, your dog could be bringing a danger into your home.”
While ‘internal’ and topical tick preventatives do an equally efficient job at protecting your dog. Only a topical can prevent a tick from being transported into your house by your dog, falling off, and potentially biting you or your family.
If your dog frequents areas with a high risk of ticks, it is my recommendation that you use a topical tick preventative.