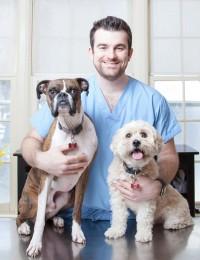 Dr. Brendon Laing is a second generation veterinarian, following in the footsteps of this father, Dr. Brian Laing. He has literally spent his entire lifetime around animals, ranging from assisting his father with large animal emergencies to now helping deliver puppies in the dead of night.

Brendon has a Bachelor of Science degree from Queen’s University (2009) and a Doctor of Veterinary Medicine degree from the University of Guelph (2013). He is also a recipient of the prestigious Small Animal Surgery Award from the American College of Veterinary Surgeons. After graduation, he joined his father in practice at Town & Country Animal Hospital, making them a rare father-son team.

When Dr. Laing isn’t serving the pet community, he spends his time with his wife, Cassandra, and his rescue dog Watson. He has always had a passion for travelling, and has been involved in previous years with Global Vets – an organization devoted to the care of animals around the world.

In the summer of 2011, Brendon’s passion for animal brought him to Thailand where he did 6 weeks of volunteering at an animal shelter, a marine conservation and an elephant santuary.

To read his blog about his experiences, please click on the first photo.